I LOVE headlines like this: Nun Gives Birth To Surprise Baby

And I LOVE the other nuns in this story, surrounding the nun who had the baby, denying that she is in fact, a nun. Because the idea that she could be a nun and procreate AS WELL is so ridiculous.

And most of all, I love that they are called ‘The Missionary Sisters for The Love Of Christ’.

I mean, FOR THE LOVE OF CHRIST. 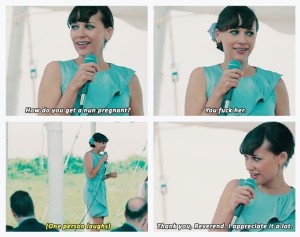 Ecstasy hit the streets of Dublin sometime around the time that I turned 16 or 17 years of age. I don’t remember my parents ever talking to me about the dangers of drug taking, but thankfully I was too much of a chicken shit to take any. Plus, I was really vain, liked to show off on the dance floor and didn’t like the way people looked when they were marouavih.

Loads of my friends took drugs at the time; some have left this world because of addiction, some have health issues today due to drug taking in the past and some are absolutely fine.

Still, I worry about the advances in the manufacturing of drugs now, how I’m going to approach the subject with my kids when they’re experimental teens. It’s news stories like the ones this one this week, when there’s a ‘bad batch’ that could potentially kill our kids, that keeps me awake at night. 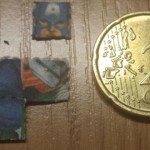 Ryan Tubridy interviewed ‘Chris’ on RTE 2fm yesterday, who admitted to regularly beating his wife some 20 years ago – he was eventually criminally charged with domestic violence after she was hospitalized.

Ryan, who I have always admired, kept his professional interviewer cool insofar as he could. Eventually, he did the most amazing thing & told ‘Chris’ on air that if had been abusing someone he knew, Ryan would personally call to his house and BREAK HIS LEGS.

Three hundred cheers, a billion high fives, a million hugs and all our hats off to a man finally telling another man ‘ARE YOU F*CKING KIDDING ME??!!’

Read Ryan’s article on the matter in the Independent today. There’s also an audio link to the interview, and be warned, it’s very hard to listen to.

How many of you out there employ Au Pairs as a cheaper and more convenient form of childcare? How much did you pay them? How many hours did you ask them to work?

And, be honest, at some point did you take the piss just a TINY bit and realize that what you now had on your hands, was a potential ‘Extra You‘? If you asked them nicely enough, could you get them to engage in some light ironing, rearrange your knicker drawer and perhaps stand in for you on the Weekly Shag With Your Partner? (Just get an Au Pair with the same general skin and hair coloring as you – they’ll never know the difference).

Check out this story from the Irish Mirror during the week – this mean-ass couple in Donegal wouldn’t even let the poor Au Pair have a second potato for her tea…. Let us know what you think. 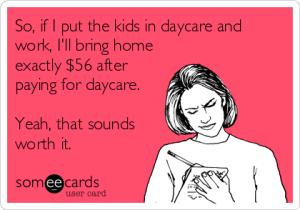 We love this story from the UK during the week – a whole heap of ‘Don’t Fuck With Us’ breastfeeding mothers decided to stand (also sit, lean etc) in solidarity with fellow mother Wioletta Komar.

Wioletta was unbelievably asked to leave a Sports Direct store in January simply because she was openly breastfeeding her son.

Get. A. Grip, Sports Direct.