I am having a GREAT day. I made it to the RTE radio centre, to speak to Ryan Tubridy about the book, on time, despite the following obstacles:

1. Ass Monkey used the car all weekend and DIDN’T FILL UP THE TANK WITH PETROL (a sackable offence if you ask me). And, 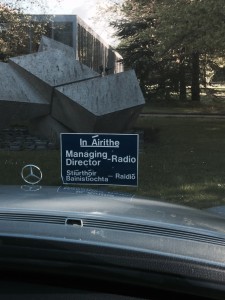 Who Does She Think She Is?!

2. I accidentally parked in the radio director’s parking spot when I arrived in RTE. (I KNOW, the state of me, but I was a bit distracted with the giddiness of it all).

Mr. Tubridy himself is SO nice and professional, that I didn’t feel one bit as nervous as I thought I was going to be, and the interview went really well. My favourite bit was when he was kind enough to ask how doggie Pearl took the news that there would be a new additional to the family, coz no one else remembers that PEARL IS MY FIRST BABY!

If you missed the interview, catch the podcast below:

Now. I am THRILLED to report that, as of today, the eBook version of ‘I Forgot To Take My Pill!’ is available to pre-order on Amazon and Smashwords before it’s release on May 20th. The 4am finishes have paid off.

Can I go lie down now please?!

Ryan Tubridy interviewed ‘Chris’ on RTE 2fm yesterday, who admitted to regularly beating his wife some 20 years ago – he was eventually criminally charged with domestic violence after she was hospitalized.

Ryan, who I have always admired, kept his professional interviewer cool insofar as he could. Eventually, he did the most amazing thing & told ‘Chris’ on air that if had been abusing someone he knew, Ryan would personally call to his house and BREAK HIS LEGS.

Three hundred cheers, a billion high fives, a million hugs and all our hats off to a man finally telling another man ‘ARE YOU F*CKING KIDDING ME??!!’

Read Ryan’s article on the matter in the Independent today. There’s also an audio link to the interview, and be warned, it’s very hard to listen to.