In July 2010, I got my own way for probably the first time in my relationship with Ass Monkey. We got a puppy; a beautiful, tiny little white ball of West Highland Terrier fluff called Pearl. She was eight weeks old when we brought her home, and her terrified, palm-sized self shook as I held her to my chest all the way in the car. Thankfully, she had the decency not to shit or wee on me – I knew we already had an understanding. 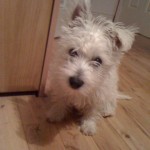 The first couple of weeks with her were not unlike having a newborn in the house. We woke to her cries during the night and would go to her little box of a bed in the sitting room, lift her out and hold her until she went back to sleep. I used this time to re-watch Will & Grace from start to finish (as if I needed an excuse). Once, during a particularly funny episode where Jack mistakes the real Cher for a drag Queen impersonator, Pearl placed her tiny paw on my arm and let out a contented sigh in her sleep, communicating that she trusted me and that I was her new protector. I am only slightly mortified to say that this tiny gesture moved me so much that I bawled my head off and whisper-promised to her that I would look after her forever. As if she understood English, which is both stupid from a ‘She was only 8 weeks old’ perspective and the fact that she’s a dog. I know.

By the following January, I was pregnant and Pearl was a great source of help and comfort to me. She kept me active by demanding to be walked around the great big football fields by our house and when I rested on the couch or in bed (she still slept in our bed every night in those days!), she snuggled right in beside the bump – warming me, protecting what was ours. 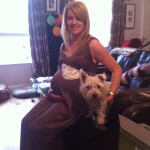 Not only did people ask me the usual questions when I was pregnant:

They also always asked: What are you going to do about Pearl??

At first, I used to stutter and blubber through my answers; ‘Oh we’re just going to keep a very close eye on her with the baby, she’s very kind natured, it’ll be fine’, etc. But then I started getting pissed off. What did that mean, what was I going to do about her? She was a tiny white puppy for christ’s sake, I’d think – not a f*cking paedophile. Eventually, just out of devilment, I used to look these questioners right in the eye and sincerely reply; ‘As soon as the baby comes along, we’re just going to have her put down. Thanks for asking’. 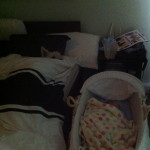 Pearl and Jacob having a nap

The day I went into labour, I wouldn’t leave the house for the hospital, until someone came to get Pearl. I was crying because I didn’t want to leave her. My mum was there, promising she wouldn’t leave until Ass Monkey’s sister came along to pick her up. It was arranged that Pearl would go on holidays for a week. At the end of that week, we were only just back with our little babba Jacob, and even though Ass Monkey’s sister had offered to take Pearl for longer, I wouldn’t have it & wanted her home. I lifted her up to see and sniff little Jacob in his moses basket and she wagged her tail. Phew, we all sighed – she doesn’t seem to want to eat him.

Twenty minutes later, she was scratching at the front door. Walkies. Twenty minutes after that, I figured out how to assemble the pram, put the baby in it, find my runners and get us all out the door. If I walked for five minutes that day, I was lucky. My body wasn’t quite able for it yet. But every day, Pearl stood at that door, and demanded to be walked. And even if I didn’t feel like it; even if had spent two hours crying because I was exhausted and felt overwhelmed; even if the house was upside down, my leggings were on inside out and the washing machine had leaked all over the floor – Pearl got walked.

When I think about it, and my emotional state generally, I think Pearl saved me. I had suffered with depression here and there over the years and really anticipated that it might kick in again after the baby was born.  It didn’t happen. All those walks helped me to lose the baby weight, got me out of the house, forced some fresh air into my lungs, got me away from the trudge of working from home and noticing all those dirty corners that you think need cleaning (you don’t).

We of course kept a very close eye on Pearl when she was around Jacob, particularly when he started crawling because she was so freaked out!! These days, I mostly try to keep Jacob away from her, so that he doesn’t pull her tail/feed her chocolate/shove his toy cars up her arse. Mostly, they’re great friends. It’s just as well we didn’t have her put down after all ;o) 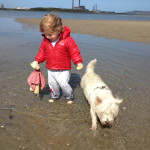