Silence used to be my friend. It meant uninterrupted sleep. It meant I could read a magazine in peace. It meant happiness.

Then Ed got mobile. And I discovered that, as a wise friend and father of three told me, silence is your enemy.  Silence now means Ed has no reason to be shouting for my attention.  It means he is otherwise engaged.  It means it is very possible that he is eating my make up.

Now granted, as his mammy I should keep an eye on him at all times. However, even though he’s still mastering walking, the little dude can get about. A mixture of steely determination, ninja like moves and raging sense of curiosity results in Ed being able to get to whatever he sets his sights on in a scarily quick, yet quiet manner.

The problem is this; the silence sort of creeps up on you. It’s not like everything suddenly goes quiet. You just realise with a jolt of horror that there has been no noise from your little one for WAY too long. And then it’s the dreaded dash to find out what they are doing.

I have found Ed paying homage to the Andrex puppy in our bathroom, playing with a doorstop he pulled off our wall and having opened our CD player, spinning my aptly named “Keep Calm and Relax” CD with his grubby little hands. And apart from my make up, I have caught him munching on stones, the sole of one of my Birkinstocks and a puppy’s tooth! (Tooth no longer attached to the pup thankfully)

But it’s not all bad, not every silence sends chills down my spine. There is of course the sweet golden silence of my sleeping baby. And as I look down on my little angel, enjoying the soft sound of his breathing, knowing this is the one time he can’t get up to any mischief, odds are he’s sleepily creating a nice big poo. 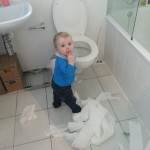 In October 2012, Emma entered the madhouse that is parenthood. Her little boy Ed makes her smile every day, even if it's through gritted teeth while up to her elbows in poop. Said poop duty is happily shared with her lovely husband John. She's currently awaiting "The Brood - Part 2" to kick in but in the meantime Ed The Nutter keeps both Emma and John on their toes! Read Full
More posts by the Author »