I once played a comical side-kick to a ‘Life Coach’ from Co. Louth.

He was ‘Batty Ryan’, played by Joe Rooney and I was Katarina, a very scorpy Polish woman who stayed by Batty’s side for mainly suspicious reasons.

Joe Rooney and I endeavoured to take the piss out of the all-too-common ‘Life Coach’ or ‘Guru’ who burst onto the post-Celtic Tiger scene in their thousands circa 2009/2010.

They were going to make things better, you see, change your lives, get you right back up to the top of that corporate ladder and help you be wealthy once more.. if only you would hand over your credit card details.

Joe and I didn’t really buy into that B.S. so we wrote an entire comedy show around it; “Batty Ryan Will Change Your Life!”

The show was brilliant and I enjoyed every single minute of the tours that we did around Ireland. That particular comedy character came to a grounding halt when I got pregnant with Jacob in 2011 as alas, playing Katarina required a few energetic dance routines AND a bit of a physical fist-fist with Batty Ryan.

(Which she won, of course).

But the Tony Robbins ‘I Am Not Your Guru’ documentary caught my eye on Netflix just over a month ago.

It came at a time when I was feeling a bit overwhelmed and unsure as to what direction my life was taking.

I had been working long hours away from the kids and as Jacob was about to start primary school, that time away from him was making less and less sense.

There was also some frustration around trying to find the time to get my own things done – setting business plans afoot, getting the house in order after the extension, writing, and spending time with my gorgeous little family.

It just seemed as though those who I mattered the most to, were the ones who were getting the least of me.

So I spent two nights watching the ‘I Am Not Your Guru’ documentary around that time of uncertainty.

I didn’t like it all – some of it was very uncomfortable to watch in the sense that I felt as though his audience members at the ‘Date With Destiny’ event featured were extremely vulnerable and had spent a TONNE of money to be there.

But small parts of it resonated with me. No matter what Tony Robbins intentions are or why he exists as such an important figure to so many people, he is a self-made man who is living a life that he truly believes in and wants to live.

I liked that message a lot and felt inspired to take stock of my surroundings and do the same.

So at 7 am the next morning, I got up and hit the beach for a big walk before Ass Monkey or the kids got up.

Later that day, one of our main full-time staff handed their notice in at our family business Dynamic Cater Care and it was obvious to me: I needed to go back and focus on helping out there while at the same time, calling my own hours.

It took all of 48 hours to make that decision and put the changes in place. When you know, you know…

Jacob has started school and I am now home at 4pm, available to eat dinner with him and Eva, stay on top of what’s happening in school and read their bedtime stories, all cuddled up together the way I needed it to be.

It has made a huge difference to all of us and I genuinely feel like a happier person for it.

So thank you, Mr. Tony Robbins – you might actually be my guru after all.

My belief that there is nothing on the telly has recently been confirmed.

As we are (yes, STILL) living with my parents while the house renovation work goes on (and on), we are subject to their own telly-watching habits.

Let me be clear: they have ALL the channels – every last one of them – and yet, every evening pre and post news hour, they flick through pages and pages of offerings from television stations and never land on a single one.

‘Nothing on!’ they’ll grumble, and I wholeheartedly agree. Except for maybe Graham Norton, Celebrity Juice and oh my GOD I loved Bridget and Eamonn on RTE 2 recently.

My folks go to bed nice and early and so we scramble for the remote to get Netflix on. Lovely, soothing, reliable Netflix. They won’t mess you around with ads or re-runs of Keeping Up With The Kardashians so that you’re completely confused as to whether Scott is on or off the scene…oh no.

Netflix has your back. Netflix just started showing AB FAB.

Ok, Ass Monkey doesn’t REALLY judge me either, but would he raise an eyebrow if I wanted to re-watch every single episode of Orange Is The New Black before Season 4 premiers on June 17th? Yes he would. Would Netlix? No, Netflix would let me do my thang.

Ass Monkey has that habit of either speaking, or rustling some packet or other at high volume, right at the pivotal part of a movie or programme. Imagine, you’re on the last episode of Season 4 of House of Cards. You sat on the edge of your seat for every other one, marvelling at how Claire can look like that when she acts like THAT.. you have just reached the final thirty seconds and himself pops his head in with a ‘I’m just heading out for a pint ok?’ SHADDAP I’M WATCHING MY SHOWS!!

I feel like this decision was made by Netflix to satisfy me personally. I feel like Netflix knows how much I have ever loved Ab Fab and did it because Netflix loves me too and wants me to be happy. In contrast, Ass Monkey recently asked me if I’d like to watch a documentary with him about the potential existence of alien life form in our solar system. Yep. He doesn’t know me AT ALL. 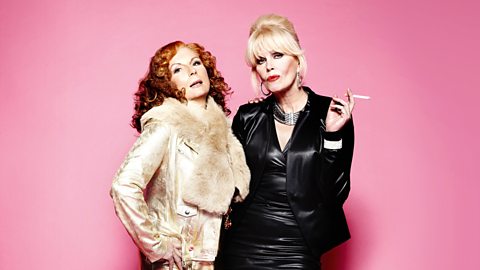 I am part of the Netflix Stream Team and I received a years free subscription and an Apple TV in return for reviews and updates on what we watch.