‘Oh, if I can breastfeed, I will’… ‘If it doesn’t work out, sure I’ll go straight onto bottles’ … ‘I won’t be killing myself with breastfeeding, I’ll definitely be getting Dadda to give her a bottle in the evening so I can rest’ ….

All of these words came out of my mouth while I was pregnant. All of them. So how then did I end up sitting on the sofa one midnight with a hot water-filled newborn nappy clutched to my far-too-long-suffering boob??

During my first appointment at the maternity hospital, I was told that they were ‘Baby Friendly’, as  they’re pro-breastfeeding (meaning, I guess, that if a mam chooses to bottle feed, they’re baby unfriendly…) In my head I had decided to breastfeed anyways. I armed myself with some information – I know now that it probably wasn’t quite enough – but as far as I was concerned it is a natural thing & I am a bright, healthy, (sort-of) young woman. The babba girl would surely just hop out of her cosy cocoon & launch herself straight at the feeding source & we’ll be as one, in food, for as long as she wants! Yes, I even thought that I’d continue to feed until she decided otherwise … maybe even one & a half or two years, that’d be fine! My inner hippy was almost smug.

When beautiful June arrived into this world, I found myself checking her gums – surely she’d been born with razor blades embedded in there?? The toe-curling agony of attempted latching on, the discomfort of learning how to hand express, the hellish 16 hour cluster-feeding episode at around day 10 all were overcome & within a few weeks we had found our rhythm. I was really beginning to almost enjoy the process of giving sustenance to my little beaut.

Almost as soon as I was on the uphill, an untreated blocked milk duct worsened to an abscess & all the massaging, pumping & yes, even resorting to the nappy compress (Google lent me that one, apparently nappies will hold the heat longer than a regular washcloth!) didn’t work. Even more upsetting was the vision I had that my partner would never lose this less-than-romantic image of me, & our baby-making days were surely dead & buried!

At that stage I felt I should just give up breastfeeding. Although I had given the girl the very best early milk & was finding the whole struggle really physically stressful,  I just couldn’t give up . She was thriving on it … Meanwhile, I was withering away while still trying to keep the house looking reasonably clean, keep on top of the laundry etc. I wasn’t heeding that most important advice of ‘Sleep when the baby sleeps’ & wasn’t being kind enough to myself. Breastfeeding really is a full-time job for the first few weeks, a midwife advised me to take to the bed with the baby; bring enough food to keep me going all day & just rest, rest, rest. I didn’t listen but her advice has echoed with me since; I genuinely believe the whole process would’ve been smoother if I had.

A spell back in hospital & heavy duty antibiotics cleared the abscess up eventually but the lesson learnt is mind your boobies! If something seems wrong,  get to a doc, get the drugs & get back on track! A boiling-water filled nappy will probably not sort things out. Ahem…

Would I breastfeed again? In a heartbeat, but now armed with experience & the vow to be kinder to myself throughout the whole thing – the laundry will wait! 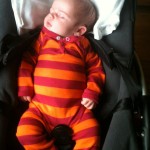 One thought on “Mind Your Boobies”

Sue, also known as 'Ickle Sue' because she's so tiny and cute, is mum to the big smiler, June, girlfriend to Ferghal and works full-time, despite what her inner hippy might have to say about it ;o) Read Full
More posts by the Author »