I have a countdown app on my phone. Normally it counts down to holidays, concerts on school nights and spa breaks that I accidentally put on the credit card. Things to look forward to as I obsessively click on the app in work, daydreaming of not being stuck under the desk. I should probably explain that last bit. I don’t tend to hide under my desk (very much) nor am I so large that I get trapped down there when I climb under to retrieve the last Reisen chocolate chew that has rolled, unceremoniously and unwrapped out of my carelessly discarded handbag. I’m a puppeteer, so I have a legitimate reason to be down there. And I have five good reasons to legitimately be daydreaming. Although I think the psychological term is chronic denial but hey, who wants to face up to reality here? Clearly not I!

Now the app is counting down to the birth of my first baby and today it reads 34 days. Thirty four feckin’ days? How did that happen? I have had a long time to get my head around the fact that we’re having a baby. Longer than most. I knew about a week before my period was due as one of our dogs burst into the bathroom when I was having a wee, sniffed the air and gave me the “Not Again” look. Dr. Dog, as we shall call him for the remainder of this article, lest his identity be uncovered and he gets hounded (pardon the pun) by This Morning for interviews, has done this on five previous occasions. Gone on to guard me with his tiny scruffy body and great big heart until I started to bleed and lose the pregnancies and cuddled me endlessly as I recovered.

See, I told you I had five good reasons to indulge in daydreaming and denial. The first miscarriage was shocking. We found out at a ten-week scan. Expecting to see our weeny baked bean in the womb, we instead saw an empty sack and a look of professional sympathy on the sonographer’s face that broke my heart into tiny pieces. I think I have loved my husband from the moment I first saw him but as he helped me dress after a series of invasive scans that day, I never felt so loved or cared for or protected.

And so over the next two years we kept trying, our hearts getting ever more bruised but growing stronger, together, every passing day. Falling pregnant was unbelievably easy but keeping the babies seemed impossible. Horribly, you have to wait until you have had your third miscarriage to see a specialist (even going privately, as we were) and at that stage my body and soul were ravaged. We adopted a policy of going on adventures to get ourselves through. A few days after the second miscarriage, I found myself flinging my broken heart and wobbly womb down a ski slope; after the fifth miscarriage (by which time we had every test under the sun and been diagnosed with unexplained infertility), we ran away and got married in New York and rode rollercoasters in the blistering Orlando sun. Always together, smiling through the tears.

We were lucky enough to have been referred to the Merrion Fertility Clinic where finally, we were treated with great compassion and respect. It wasn’t always the case. Between all the miscarriages, I had been seen in three different hospitals and honestly, the experiences ranged from being humiliating to down right callous. However, at the Merrion Clinic, we found a place where we had a voice, were listened to and were encouraged to try one more time before we thought about IVF.

We considered whether we could face another pregnancy at all and decided together that we could. One last time. But if it didn’t stick, we would forego IVF and keep adventuring.

Now, 35 weeks and 1 day later (36 weeks after we got married) we are expecting a baby girl who, as a I type, is sticking one of her feet, or is that a knee or a plump little baby bum (?) out from beneath my ribs.

Between the 6th and 14th week of my pregnancy I had a scan every week and then a scan every fortnight there after.  At every scan she has made herself known and given us a wave. It’s her signature move. I threw up for five months, I developed SPD (pelvic pain), so have been limping for nearly four months and am fairly immobile now. Pamela Anderson called last week and asked for her boobs back. I have a wardrobe of the cutest baby clothes you have ever seen and a limited edition Bugaboo. I signed up for product testing and tested maternity jeans and stretch mark creams.  I’m DEFINITELY pregnant. So I should have accepted by now that we are having a baby, shouldn’t I? But thirty four days is plenty to really start believing, isn’t it? And read the books I haven’t read and rub that oil in, down there, wherever it’s meant to go. Right?

Oh and then there’s one teeny tiny thing I should probably have told you. I lied to the countdown timer. Well, more like omitted to tell it I’m probably having a c-section. And, um, that means more like 27 days…. But that’s plenty of time, right? Right? Maybe I’ll ask Dr. Dog. 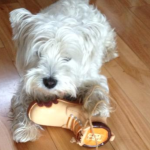 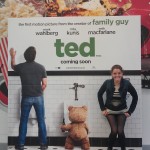 Mature mother in the making?!

One thought on “Birth By Denial”

Doireann has been an actress, a day dreamer, a daughter, a procrastinator, a friend, a lover, an adventurer, a wuss, a wife and a waitress (for 11 whole hours) ... But not necessarily in that order. She is currently a brand new, fresh out of the packet, back pedalling mammy (i.e. doing everything she thought she would't do, EVER) and she loves it. She has managed not to break the baby yet and is delighted with herself. She writes and she puppeteers and she voice overs but mostly she taps her foot under the desk waiting to get home to watch Peppa Pig with her mini princess and play "which one of us smells like pooh", her daughter's current favourite game. Read Full
More posts by the Author »