We’ve just experienced our first ‘Easter Holidays’. As in, this year we have a kid in a pre-school that closes the doors for two full weeks so we can all stuff ourselves with chocolate or whatever.

Up until now, we worked while Jacob was in the crèche and didn’t have to think about filling midweeks with entertaining activities, play dates, dinners and excitement for a little person. We never ever thought about having to take time off work because there were no ‘school holidays’. But now he’s growing up, we have the normal school year schedule to adhere to. And not only that, this year Jacob has a baby sister to cater for as well.

‘What will I do with them though?’ I wailed to Ass Monkey, on receipt of the school calendar. ‘Two weeks is, like, forever’.

‘Sure wouldn’t they be delighted to hang out with you. You could get out for walks together every day and catch up on all those fiddly bits around the house you haven’t finished yet…’ he trailed off.

‘That I haven’t finished yet?’ says I. ‘Like the hole in the kitchen where a press door should be, the hole that’s been there for an entire year?’

He stared at me. I stared back. Nobody moved an inch.

‘Maybe we could go away?’ he offered, nervously.

We took a long weekend in a family-friendly hotel in Kilkenny that boasted a kid’s club, a pool, a bar, a spa, my two friends and their daughter, a fancy restaurant, an outdoor hot tub, walking distance to town… and did I mention the bar?

‘I’ll bring a bottle of bubbles and then we’ll take turns babysitting each other’s kids so we can drink in the hot tub!’ I squealed.

Like most of these little notions I have, that any situation where my kids are present might at all result in my drinking any amount of booze in any matter – sand, sea, hot bubbling water etc – I was sorely disappointed.

Jacob wasn’t confident enough to try the kids club without me so I spent one night watching Rapunzel and another watching Monsters Inc. with all the other kids while Ass Monkey and Co. drank their faces off in the bar downstairs. By the time kids club finished, it was 10pm (hot tub closed, people), and I had to spend another half hour trying to get him to sleep.

The four of us were staying in one big hotel room that had no walls or veranda or any other place I could go to watch TV or drink or have a conversation where I wasn’t in danger of waking the kids. By Day Two-and-a-half the cabin fever of the hotel room was so much that I declared I would actually rather be at home cleaning the jacks. For the bit of personal space. Ass Monkey swore that he would get the damn press door from Noyeks on the way home if we could just get out of there.

But we persevered because Jacob was actually having the time of his life. By the last day he had figured out that he could use the hotel toilets by himself and so he spent a good chunk of the early afternoon doing just that. In and out, over and over – happy out. It was the only time all weekend that he didn’t want my attention. I sat by the fireplace in the lobby and sculled a couple of glasses of wine while I ‘supervised’ him. (Hey, I wasn’t organising the holiday and driving home as well).

PS: I hear the schools are planning to close for three weeks at Easter next year. THREE WEEKS?! *head explodes* 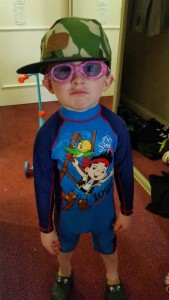 At least one of us had the time of our lives…. ;o)

**This article first appeared on HerFamily.ie**