I am a mother to two teenager daughters.  I actually never ever wanted kids…I remember as a self assured and confident 18 year old Know-It-All, telling a rather shocked boyfriend at the time that I had decided no way was I ever ever having kids.  I had made up my mind that they would surely cramp my lifestyle, that I would have this huge responsibility for EVER, and that they would cost me a fortune.  I had it all worked out, I was going to live in a really nice apartment – Ranelagh or Rathgar perhaps – and have a fantastic social life every night of the week…and of course a successful career.

Fast forward ten years, I was 28 years old.  I had somehow managed to work my way up through the wonderfully interesting & exciting world of insurance and had a pretty good job. I had also somehow managed to find myself married and mortgaged with a house in The ‘Burbs.  Not exactly Sex And The City stuff.  But I was still quite sure that I did not need to accessorise my life with children, and in fact when work colleagues brought their new babies into work, I was the one who stayed firmly at my desk. None of that running up to ‘Ooh!’ and ‘Aww’ at the delightful little bundles of sour milk and poo!

Then I succumbed to pressure – mainly from my then Husband, perhaps a little bit too from everyone around me having babies, and the idea of it sort of seemed like a challenge….a dare even! So at the ripe old age of 29 I had my first daughter, Rhianne, who was of course absolutely the most fantastic and most beautiful baby that ever was born on this planet!

I went back to work after my maternity leave was up, and Rhianne was enrolled in my local crèche.  When she was almost two, I suddently thought how delightful it would be if she could have a brother or sister to play with….gulp! So by 32 I welcomed Alex Beatrice into my world and was a full time working Mammy of two little girls. I say ‘my’ world, as the marriage I was in was by then crumbling, and I was pretty much doing everything for the kids by myself anyway.

Something funny happened shortly after I had the second baby. I was in my local hotel bar, when who did I bump into only the ex-boyfriend I was with when I was 18 – yes, the one I swore to I was not having kids. Well, I had to kind of laugh, and say, yeah, I have two of them now!  (There is no side story here by the way…he had really let himself go… I had a lucky escape ;o) )

I made the decision to divorce the girl’s father when the youngest one was only two. I hope it has done them more good than harm. We have moved house about five times; they have moved schools and counties with me, and we are now finally settled in the same area I grew up in …back in The ‘Burbs.

The girls are now 14 and almost 17 and I was right about one thing, they do cost me a fortune. Perhaps I will someday retire to a nice old folks apartment block in Ranelagh or Rathgar… if they don’t wheel me into a psychiatric ward first. 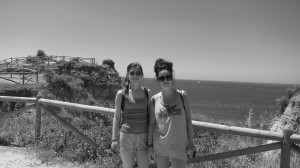 [Like this? Good. Then check out The Spider Catcher. Off you go ;o) )