He has no idea that he’s a non-Catholic who is receiving a Catholic education in primary school.

And why would he? At 5 years old, he is just following the pack and doing what he’s told (despite behaving completely to the contrary at home, of course!)

When we started the school year and he first came home blessing himself and talking about ‘Holy God’ we did have a chat with him about how Mammy and Daddy didn’t believe in god and that he didn’t have to do the morning prayer if he didn’t want to.

Ass Monkey and I also spoke with the principal and vice principal who were very reassuring in the sense that they kept religious education to a small part of the educational curriculum and mostly, they were of the impression that the end to the Catholic Church being the primary religious hold over schools was in sight.

As Ash Wednesday approached this week, the talk of Lent and ‘Holy God in Heaven’ was firmly on the lips of our little school goer so I thought maybe it was time to have another chat about our non-religious viewpoint as a family.

So while he was in the bath on Tuesday – CALM, I thought – I told him again that the morning prayers in school are his choice to do or not (he has been choosing to do them) and that he didn’t have to receive ash on Ash Wednesday if he didn’t want to.

“Why mammy?” he enquired, attempting yet again to shove his toothbrush down the jet holes of our bath.

His reaction was spectacular.

And he pouted for about half an hour, truly upset.

I felt like I’d told him that The Man In The Big Red Suit Who Lives In A Toy Workshop With Elves At The Furthest Northern Point Of The Planet Whose Sole Purpose Is To Reward Good Children With Gifts And Bad Children With Sacks Of Coal At Xmas Time wasn’t real.

Kinda the same thing though, innit?

Anyway, he got the ashes. And if he wasn’t sure before, at least now he knows that jesus loves him. 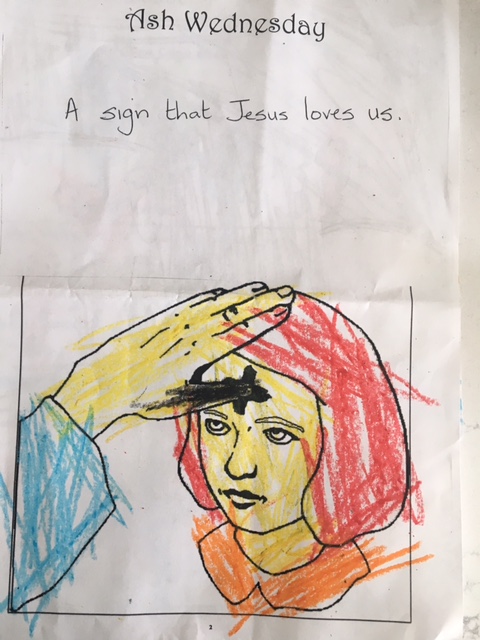 I had a little panic two weeks ago when our 5-year-old non-Catholic boy showed me how he’d learned to bless himself in school.

I didn’t show HIM the panic obviously, this mammy does her best to keep her emotions under wraps around the kids, but inwardly, I hated it.

I am not a Catholic, nor is Ass Monkey (although he believes in ‘god’ more than I do at this point) and our kids are non-religious.

So why did we send Jacob to a Catholic school? Well, it was the best option to us in our community.

We knew we would have to stay relaxed about certain things, such as the language of the Catholic religion that we knew he would most likely come home with but we would stand firm on others, such as not permitting him to make his communion and trying to keep him out of any masses that the school were attending.

I think I just wasn’t expecting it all to kick in so soon, he shared his class’ daily prayer with me within a couple of weeks of him starting.

So we asked to have a meeting with the principal and his teacher (who also happens to be the vice principal) and we had a GREAT chat with them about it all.

They are so lovely and relaxed that it was easy to sit with them and say, ‘Hey, this is our first time down this road, what should we expect?’

Jacob’s school is in a tiny village in North County Dublin and they are as progressive as can be while doing their job in following a religious curriculum as set out for them.

They assured us that they will not spend any longer than 20 minutes per day on teaching religion, there are certain aspects of the curriculum that Jacob’s teacher refuses to teach (such as the immaculate conception which she described as ‘promoting rape’ and the Creationism aspect which she described as ‘nonsense’ – I LOVE HER).

There are no major masses at the school and the local parish priest really only visits the communion-making class each year – at which point, we’ll talk to them again about how best to proceed with our little man.

These fantastic educators agree that we may see an end to one particular religion having such a stronghold in our children’s schools but that it might take another 20 years for that to happen, and I am in agreement with them.

In the meantime, I truly believe that we made a wonderful school choice for our son who, totally unprompted, has now decided that he no longer wants to say the daily prayer and we are totally OK with that.

If you want to see the video chats we had online about this subject, you can catch them here:

Followed by the update here:

If you liked this then please also check out other great Back To School chats:

Back To School: Label Everything Or Die Tryin’

Should raising a child without a religion be cause for concern?

For me the answer is a simple no. But for many it seems we cannot let go of our church-going roots in 2013 Ireland. When there are now so many diverse nationalities, why do we feel so obliged to keep to a belief system that has wronged so many children of this country’s past? Choosing to raise your child without religion can cause a stir a from a person who has not been inside a church in years, to cast a stone of deep concern. It’s baffling to me.

I am not against anyone’s beliefs, but I am against the catholic church in Ireland having any influence on our children’s education system. They, in my opinion, do not contribute to a child’s ever growing mind. There are children in this country who, because they have not been christened, will find it hard to get into a school. A fact.

My husband and I have chosen not to christen our son, Leon, because even though I was born a catholic, that is where it stops for me. So what does that mean for the way my son will live his life? Well, it won’t mean anything at all! He will not lose out. He will not be excluded from anything, he will not be judged, he will not go to hell.

This is why I am fully behind Ireland’s ‘Educate Together’ schools. These schools are a non-judgemental breath of fresh air in 2013 Ireland and I am so excited to be aiming to send my son there when he is of age. I would never judge any of his future friends, or friend’s parents for having a religion. So all I want in return is for nobody to judge him, because he does not have one at all.