Daddy, dad, da, pops, father, pater, papa, old man – whatever you call the man who brought you into the world, the time to remember him is fast approaching on Father’s Day, June 21st. Irish charity Anam Cara is asking people to share a special picture of themselves with their Dad using the hashtag #Daddyandme on social media, and to nominate three friends or family members to do the same in order to raise much needed funds.

Fathers’ Day is a particularly difficult time for those Dads who have been bereaved of a child or children. The aim of the #Daddyandme campaign is to raise awareness of the difficulties bereaved Dads face. This June, Anam Cara is asking members of the public to take part in the #Daddyandme campaign and donate €4 by texting SUPPORT to 50300 to raise funds to provide support services to Dads and families who have experienced the death of a child.

International rugby player and #Daddyandme ambassador, Mike Ross said: “As a Dad to two wonderful children, I dread to imagine how I would even begin to cope with the loss of a child. I experienced first-hand the impact that this can have on a family when one of my brothers died eighteen years ago. Not only did I have to deal with my own pain but I also had to witness the impact that it had on my parents and our family unit. Anam Cara provides invaluable support to families at this traumatic time and I’m asking everyone to get behind the #Daddyandme campaign and to help raise funds for this worthy cause.”

Anam Cara is also producing an information leaflet aimed at bereaved Dads, as part of a larger resource pack for bereaved parents. This is in the final draft stage and once published will be distributed to counsellors, social workers, emergency rooms and funeral homes. Unique in that it is written by bereaved Dads themselves, it offers practical guidance through this most devastating of experiences.

Nearly two thirds of Irish people know someone whose child has died but the intense grief associated with the loss of a child lasts much longer than society realises. It’s estimated that in 2014 alone, 2,100 families suffered the loss of a son or daughter.
How Can You Get Involved?
1. Share a picture of you and your Dad on Facebook, Twitter or Instagram and include the hashtag #Daddyandme. The photo could be a recently taken selfie or one from the archives!

2. Tag and nominate three friends or companies to do the same

3. Donate and include the following text information in your post or tweet – ‘Text SUPPORT to 50300 to donate €4 to Anam Cara’* 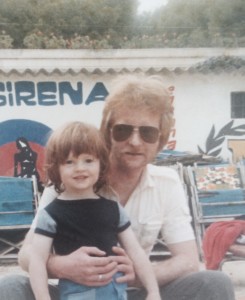