On Halloween morning 2015, my childhood friend Melissa woke up to what would be a living nightmare.

Her daughter Mara, then 4, blonde haired and blue eyed and delicate in that most beautiful of little girl ways, had developed a huge lump on her neck, literally overnight.

“She wasn’t sick”, Melissa told me over a recent coffee (one that we held hands and mostly cried during).

“In hindsight, there were little things; night sweats, a runny nose, a cough – all the normal things that children get. Nothing that we were worried about”.

The journey from parental concern for Mara to full diagnosis of Hodgkins Lymphoma is rife with those all-too-typically-Irish-medical-system stories – under-diagnoses, misdiagnoses, it isn’t cancer, it is cancer, she won’t need chemotherapy, she will…

I personally knew very little about Hodgkins Lymphoma except that when Jacob started school in September last year, there was a little girl with a ‘Freddie’ in her arm because she was having chemotherapy. 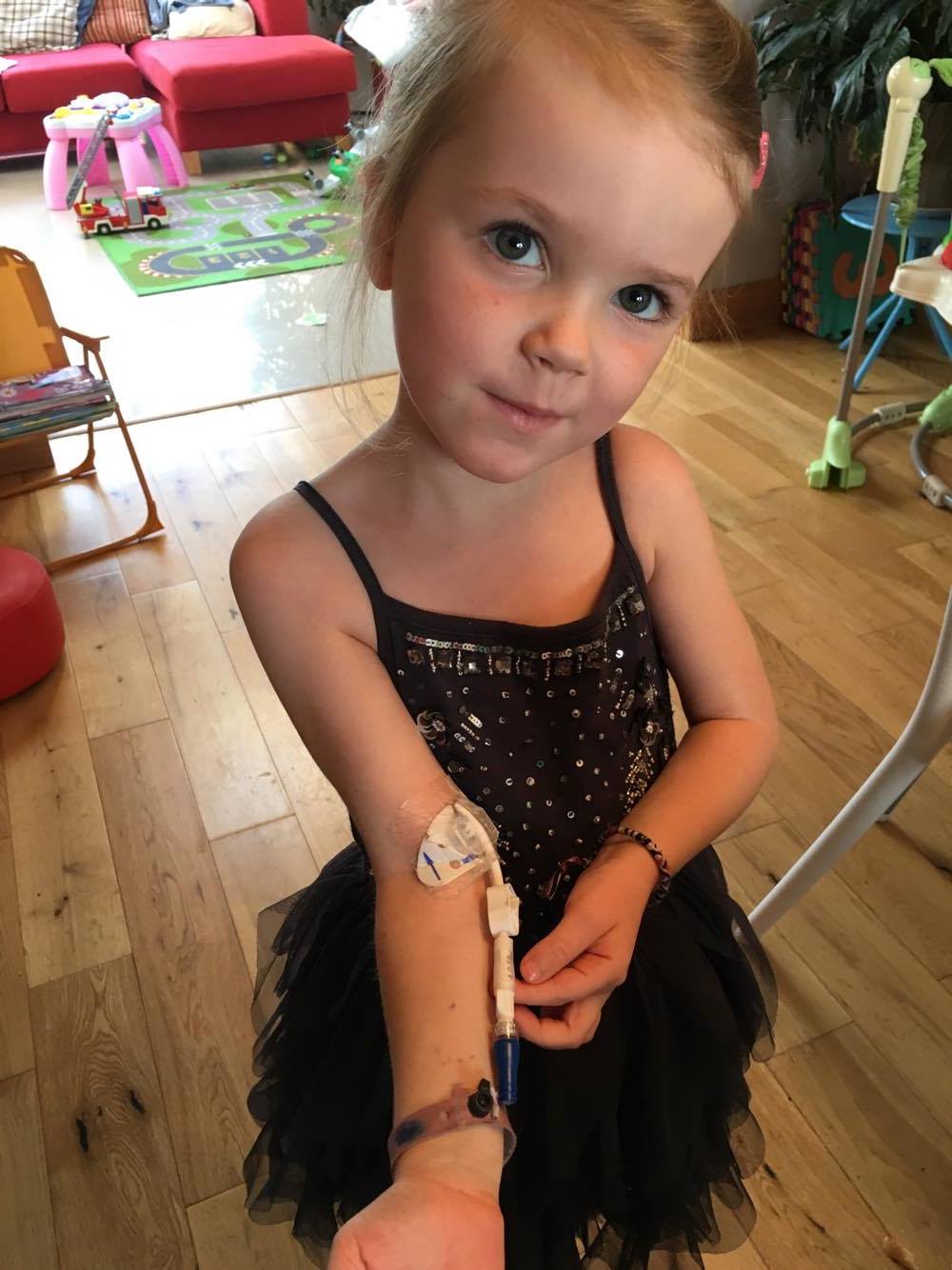 Look how beautiful she is!

You burst into tears when you hear this, about this child who didn’t have cancer 11 months previously, your friend’s baby girl, the baby girl who is the same age as your baby boy…

Melissa tells me that it is the most treatable of the childhood cancers, the survival rate is higher than others but the chance that it might re-present within 5 years is also quite high.

Horribly, St. John’s Ward in Crumlin Children’s Hospital lost other children while Mara was a patient there, but our little hero Mara came through to the other side.

My friend burst into tears as she recalled how she and her husband Alex would have to help the medical staff hold Mara’s tiny body down to receive her chemotherapy, an image that I will never forget for her.

She tells me about Aoibheann’s Pink Tie. They were a huge support to Melissa and her family at the beginning – they gave them ‘Chemo Duck’ to help explain the process of chemotherapy to Mara (he has a Freddy too), as well as providing sound practical support when they needed it the most. 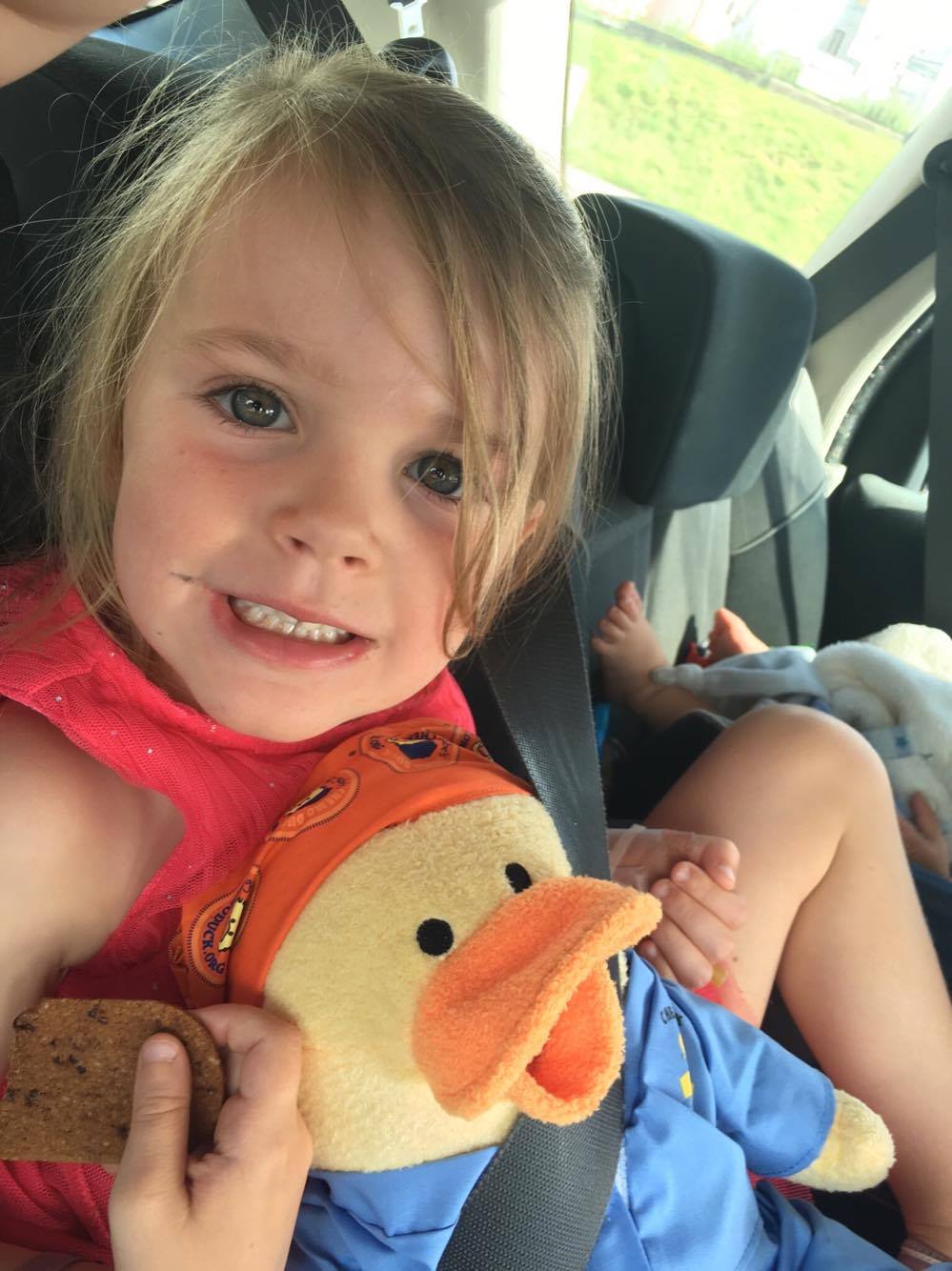 My Jacob is a little bit in love with Mara, the now 6-year-old girl who no longer has a Freddie in her arm and who was aptly awarded Junior Infant Student of the Year at the primary school that they attend.

Yep, we all bawled then too..

In fact, all of the kids are quite in love with her. Even while she was still having treatment, she insisted on writing out and colouring individual Valentine’s Day cards for each of the kids in her class last February.

Melissa and Alex are looking forward to a clear scan at Mara’s next appointment this month but are still processing all that they have had to deal with in the last 2 years.

Besides managing Mara’s illness and treatment, they also have two younger children to take care of. So not only were Melissa and Alec feeling miserable about Mara being unwell, they also had that all-too-familiar parent guilt that they weren’t giving the other kids enough attention.

“I’m still so angry”, my gorgeous, and very placid friend Melissa, tells me. “Why us?”

**If you are worried about any aspect of your child’s health, seek advice from your GP immediately. If you are not satisfied with the outcome, seek a second opinion. September is Childhood Cancer Awareness month each year but let’s always think of, and support, those families who are struggling. Melissa tells me that the nicest things that people did were the simple ones – dropping over a dinner, cutting the grass, popping in to say hi.

Take care of each other x**