It took me a year to lose the baby weight after Jacob was born. A full year, to the day. I am normally at my happiest, healthiest, skin, hair-and-nails-bestest at 9 stone. Despite determining to ingest a diet of only Bran Flakes and plain Digestive biscuits when I was a teenager, I was disappointingly never anorexic and stayed at 9 stone.  Ecstasy landed on our shores right as I was hitting my late teens, discovering clubbing, Ibiza and all the celebrity DJs I wished to shag. I was ripe for a mild amphetamine addiction that might have contributed to the perfect ‘Stripper Body’ that was so chic and so thin. But alas, I much preferred dancing to drugging, and my over-powering vanity refused to let me chew the face off myself whilst rocking a neon pink PVC skirt. I mean – why ruin a perfectly well assembled outfit? Stayed at 9 stone…

The only time I really ever lost weight was when I got the chicken pox at the grand ol’ age of 29. That’s right, not the shingles, the chicken pox. On consultation with my mother afterwards, she indicated that she was ‘pretty sure’ that I had them as a child, and promised to cast her mind back after dinner. I’m still waiting for her feedback. That I’m her first child and only daughter, and she still can’t remember, shouldn’t be worrying at all… Ahem!

I got those chicken pox everywhere, and I mean everywhere… but the most of them were in my throat and threatened to close over my wind pipe. This not only delighted my entire group of friends and family that I would be unable to speak for several days (at least), but it meant that I had to survive on a diet of Ready Brek and Petite Filous for two weeks. By which time I was seven and a half stone, right in time for Xmas. (Nothing like a pre-Xmas Pox Attack to get you into that tiny black dress ;o) )

The thing is, I really like my grub, and when I was pregnant, my taste buds burst open (partly due, no doubt, to the fact that I quit smoking when I knew I was up the duff) – and I loved, loved, LOVED my grub. I enjoyed eating in, eating out, planning the big Sunday roast, shoving tubs full of ice cream down my throat and could most days be found with my head stuck in the fridge. I was active though too; I went swimming, took pre-natal yoga classes and of course, walked Pearl every day. I planned to put on 2 stone by the time Jacob’s due date came around and by jesus, I stuck to that plan. I was never one to turn down a challenge.

I must admit, I had a fair few days where I bemoaned my new body shape after Jacob was born. There was no firm bump any more, that I could point to and say, ‘Here!! This is what that extra two stone is about!’. My bump was deflated, my body was slowly easing itself back into pre-baby shape, my boobs were trying to remember that they’d only ever been a modest 34B and I had to admit that baby had, in fact, only contributed to about half of the weight I’d put on!

I didn’t try to lose the weight straight away – I was tired, and tired = chocolate. There wasn’t a 2am or 4am or, ok, a 3pm feed for the baby that wasn’t accompanied by chocolate mints for me from the fridge. I mean, for god’s sake, I was hungry too! I made a big song and dance about attending a hot yoga course when Jacob was a couple of months old, but to be honest, it was more for the sleepy lying-down bit than anything else.

It wasn’t until we moved to Chapelizod and I had the rolling hills of the Phoenix Park, to both simultaneously drag the dog and push the buggy up and down, that the weight began to really fall off. It was a slow and enjoyable process and quite literally, when he turned one, I was back to my 9 stone self. I don’t have the privilege of being able to fork out for a tummy tuck straight after the baby was born like some richy-poo people, and really, I’m not sure how natural that is anyway. Shouldn’t we just give ourselves a break and do our best?

And for the record – I think my body is better now than it was before I got pregnant. I’m so much more proud of it because it did this super amazing thing, you know. It gave me my son. 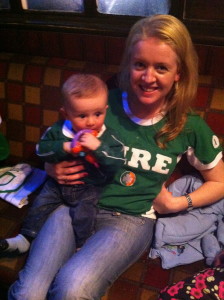