I’m one of those people that can see humour in the most unfortunate of circumstances. It may be a coping mechanism, or it may be just plain auld bad taste on my part but that’s me. As the song goes: ‘I’m the kind of guy that laughs at a funeral!’
The most vivid example of this behaviour was back in 2007 at my partner’s funeral mass. My son Josh was 3 at the time and in my arms, and was fascinated by the pageantry of “the mass”. He was asking questions to beat the band, and I’m a firm believer in being as honest and open as I can be with him (always age appropriately, of course!)-  so I was doing my best to answer him. I explained the priest and mass to Josh, along the lines of; ‘Well some people feel like they need to gather together to celebrate what they believe and to give thanks to their God, and often the priest leads them in prayer’.
‘Which I think is a bit silly, really’, I told him, ‘Because if God is everywhere surely you can talk to him wherever ya like’.
Next up came Communion. How do you explain transubstantiation and all the associated mumbo jumbo to a child?! Well I gave it a stab! I told Josh that the priest, and Catholics in general, believe that during the Eucharist the bread and wine are miraculously transformed into the actual real body and blood of a bloke called Jesus……
Josh looks at me while trying to make sense of this new information, and asks the incisive question.
‘Like a magic trick, Dad?’
Smiling to myself at his common sense view of the ritual,I answered, ‘Yes, monkey! Just like a magic trick’.
Later, as the mass ended and the priest was returning his paraphernalia to the sacristy, Josh turned to me and said ‘Dad, I don’t want to come here anymore!’
Knowing that I never wanted to see the inside of that church again; knowing that it was another step towards burying his Mam and saying goodbye to what was our little family’s planned future, I wasn’t surprised by Josh’s firm statement.  But also, knowing that he was as confused and scared as I was, and that he clearly needed answers and surety that was my job to provide to him… I asked, ‘Why?’
He looked up at me with an unexpected bright smile and said ‘Because that’s the stupidest magic show I have ever seen!!’
I won’t lie, it was the most inopportune moment I’ve ever chosen to laugh in my entire life but I did. And in that laugh, I was joined by my family and friends who’d heard the little exchange. I don’t regret it at all, in fact I’m glad it happened and I’m even happier that those who heard it, shared it!
It showed me that even on our darkest days, at our lowest moments there is always a glint. A glimmer of light to brighten the gloom and show us it can get better. It was also the day I realized I’d be on my own parenting a smart ass of epic proportions (Josh has gone on to reinforce that belief many times over!)
My own mother reckons my son is the perfect Karma for the sarcastic bollox I was as a child. However, I still deny all knowledge of being anything other than a perfect model son! 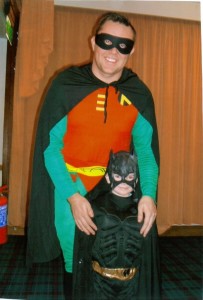 One thought on “Laughing At The Wrong Time…”