My children’s imaginations are uninhibited, not yet tarnished by impending adulthood and I think I have learned a lot from them about how to be a better and more positive person. Aibhe is now 10 and some of my fondest memories are of her playing with her dolls, mimicking me and the things that I would tell her as I got ready for work in the mornings. She loves to draw and create and would sit on long car journeys,  drawing a scene that only she could see in the air with her finger,  or using a cardboard box as a car, a plane and a castle all in one day….the possibilities for that cardboard box were endless.

She has a space in her head even to this day that we call ‘Aibheville’, where she lives as a princess with Harry Styles as her prince and an unlimited supply of Marks and Spencer’s Percy Pigs. I fear that the day her ‘theme park’ closes down will mark the beginning of the end of my little woman as she passes into her teenage years and starts the journey to become her own woman. As Aibhe was growing up, her imagination visited us quietly, as is her calm and lovely nature. Little did I know that my next child would quite literally take my breath away……Oisin came roaring into the world 5 and a half years ago with no off switch attached. He turned our lives upside down and inside out; such was the commotion that Aibhe began to call him ‘Mr. In-Charge’! 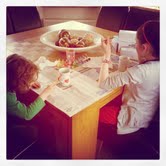 for adventure…..Bear Grylls has nothing on him! Oisin never watched tv or played with many toys. At 5 years of age he has a tool kit to rival a grown professional; he has a mound of stones he calls his ‘private island’, which he likes to maroon himself on with an empty violin case as his trunk, in which he stores all his essentials. There have been days that he will only answer to Captain and he has refused to wear shoes as he doesn’t need them to walk in sand……..we have no sand but in Oisins mind it is there.

With his sword he stands on the wall to slay dragons; his bicycle can fly through the air; his duvet is a magic carpet and an old baby blanket his cape. Our dog Minnie is his trusty steed and our new cat Otis is now his right hand man. He is convinced he plays guitar to the highest standard and of course that he is invincible. He disappears into the field out the back of our house for hours sometimes, but we never worry because we can always hear him roaring at the enemy to stand down or prepare to die. He walks with a sword stuck in whatever pants he happens to be wearing just in case of a surprise attack while we are out any where. He got wind of one of these attacks while we were in Blanchardstown Shopping Centre recently, and used a group of chairs outside Dunnes as his safe spot. I just laugh, what else can I do? He is not hurting anyone and before I know it he will have grown up.

I guess I have two very different little beings with very different imaginations living with me – polar opposites in fact – but both just as special, and I have to say I am really not looking forward to those imaginations becoming stunted by age. I have encouraged and nurtured those imaginations… ok, I didn’t nurture Oisin’s puddle searches for gold as that was having a very negative effect on the laundry basket… but I have sincerely enjoyed all the rest.

I really do even hope that when Aibhe is older she goes back to Aibheville every now and again, and that Oisin will still have a mound of stones to maroon himself on. Even when she is a top lawyer and he is leading world research in neuro science…

Janet Quinn once had aspirations above her station. She floated down from her cloud circa 2003 with the birth of her first child and hasn’t floated back up since… although she fully intends to some day!!! Read Full
More posts by the Author »