Kathy Ward and I had a lovely cuppa in her Dublin home to discuss children’s beauty pageants, how they are portrayed in the media and if they are different today than some years ago, when Kathy’s children competed in talent competitions of every kind (as did I!).

Sharyn:           So I don’t know if the version of kid’s pageants we see on TV is an extreme, and that has people so up in arms? Or if that does really happen here in a beauty contest. I know I see boys and girls who do dancing competitions…

S:         …they’re very colourful, the costumes often have pieces cut out around the midriff and legs… So is that different to the pageants? I think people watch ‘Toddlers and Tiaras’ on TV and believe that’s exactly what happens all the time. That the parents are over-sexualising their kids and making them grow up too quickly. But what about the dance comps, or my putting my son into an ad on TV, is that the same? People don’t seem to think so.

K:        You see I said to you on the phone about a well-known Irish journalist. She has her kids constantly in the Sunday World. They’re also in adverts. But she wrote a massive anti-pageant piece in the paper. I know for a fact that if she had a daughter, that she would be in that. Wasn’t she a beauty queen? So she’s being two-faced.

K:        For example, when we were in Butlins, for the Tarzan competition, there were women who got gravy and smeared it on the boys to look like they’d just come out of the jungle. All the little boys wore was a tiny pair of swimming trunks. I went to the extreme with my son of getting a feather duster and pulling the feathers off so you couldn’t see he was wearing swimming trunks. He won it anyway. That was a little boy walking up and down. I don’t know if there were pedophiles watching him, but I know I was watching him.

S:         So do you think about that when your kids are up there doing their thing?

S:         It’s much more terrifying now isn’t it, with internet access and everything. And we never knew so much about child abuse and pedophilia as we do now. So what’s to stop a pedophile or pervert from coming in to watch a beauty pageant?

K:        Most people who are there are with kids and families. There was an Irish dancing competition, going back 24 years ago, and the organizer was made aware of a guy on his own. She flung him out. I mean to see a man, sitting on his own staring at kids dancing. You would notice a man – or a woman – sitting on their own. You would.

K:        You know the way Irish dancing has gone? They have wigs, special glue to hold their socks up, they’re completely spray tanned – that’s just the way it’s gone. So if you send in your kid who’s amazing and who looks dowdy compared to the rest of them, they won’t look at her.

S:         I’m just trying to figure out where it started. If every baby is born natural and beautiful, then when did we start saying that they’re not good enough as they are to be in this competition? Why do they need so much ‘improvement’?

K:        It’s American though, isn’t it? And also, the travellers. If you look at any of those programmes, there are little babies of three in buggies with boob tubes on them.

K:        No. To me, they’re like that 24/7, where with the pageants, it’s usually over in 2 hours. And little kids go home and get everything taken off them and go play in the garden. But that’s the way those travellers are dressing their kids. And the dancing they’re doing. Pedophiles would prefer them than the kids on the stage in my opinion.

S:         What about the pressure that is put on kids for these shows? I didn’t feel it when I was a kid, I really enjoyed being on stage. I enjoyed singing and dancing, so for me, I was doing because I was so into it. But then you see ‘Toddlers & Tiaras’ where some mothers are fighting with the kids, making them cry and putting them under pressure, making them constantly train – do you think there’s a lot of that?

K:        To be honest, I’d prefer to have my kids inside, practising and saying ‘Ok, do that catwalk, now the song’ – than sitting outside on the wall, annoying people.

S:         Oh I completely agree, I’m just wondering about the levels of pressure on kids now for shows, in comparison to when I was a kid.

K:        I think it’s the same pressure.  I don’t think the parents putting these kids into pageants are bad parents at all, but I do notice that a lot of the parents didn’t ever do pageants themselves.

K:        I grew up in England and every day after school, I had some sort of activity to do. When I moved to Ireland, and had my first daughter, I had to find activities to do for her, which turned out to be singing classes, and dancing and drama. Then she had friends in school as well as her after school activities, and wasn’t outside smoking joints.

S:         I’ve always said if kids are involved in sports, or for me, in dancing, they have a sense of community. They want to stay healthy, fit, look well and they’re less likely to hang around street corners. There’s a focus on something else.

S:         I completely agree with you. This subject obviously blew up because of that American pageant that wanted to hold a competition here, and were then shuffled around from venue to venue.

K:        I don’t understand that. I saw her on the Late Late with her daughter. She was a real pageant child, and I thought,  ‘So what?!’ I’d rather see her on telly than some scumbag guy talking about his ‘ma and da being on the coke…’ blah blah…

S:         People are just really worried about over sexualizing kids because of the outfits and being made to look so grown up. Because of how much we know about sex offenders now. But I think it’s great to look at it from this side – kids are really enjoying it, it keeps kids healthy, focused and out of trouble.

K:        I think the pageants are a very well run version of what goes on in halls every Saturday at the disco dancing. The parents are the same, the kids are the same. I don’t understand why there’s such a fuss. As I said before, if there is some random man who is not with any of the contestants, do as was done twenty years ago and tell him to get out! 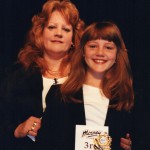 Kathy and her daughter at Butlins 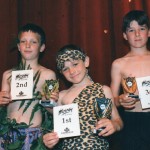 The Tarzan Competition at Butlins 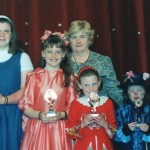