My youngest brother Noel, when he was a little boy, had what adults around him liked to call ‘Ants In His Pants’. He had so much energy that he literally could not sit still in the same spot for longer than a minute. He squirmed to the left, to the right, watching and observing everything, chattering away a mile a minute, never stopping. Even when he was asleep, he danced around the bed, ending up in the most peculiar positions – I could even hear him talking out loud as he slept from my room across the hall. Noel didn’t stay in bed for long either when he was a child; my mother says she would often wake up and find him sitting there on the floor beside her, smiling up at her; just waiting for her to be ready to play with him.

But whenever Noel himself was asked by some impatient adult or other why it was that he couldn’t sit still, he didn’t think he had ‘Ants In His Pants’ as everyone else so lazily named it. Oh no. Noel would stare at the questioner directly and reply, matter-of-fact; ‘I have an uncomfortable bottom’.

GENIUS kid. It was so funny – and so accurate – that the adult in question would kind of give up on their efforts to contain or calm him. And now that my own Jacob Fynes refuses to sit still for longer than a minute (just like his godfather Noel), that is what we are now telling everyone too.

‘Why did you have to take him outside four times during the Gaiety panto to head to the nearby shopping centre to ride the escalators, where you gave up and brought him to Argos to buy a fire truck that would keep him happy for 20 minutes?’

‘How come you’re carrying that kicking and screaming kid out of the park that he has literally run around non-stop for an hour, and he’s causing such a scene that people think you may have kidnapped him?’

He has an Uncomfortable Bottom.

‘I don’t mean to alarm you, but it looks like your two year old is traveling around the supermarket aisles in something that can only be described as fast forward.’

Terribly sad, I know. The child has an Uncomfortable Bottom. Completely untreatable, you understand.

Then, as they look confused by the mention of this medical phenomenon that they’ve never heard of before, nod sagely and walk away. It’s probably a little more fun than simply replying, ‘Eh, he’s a KID, you moron’. 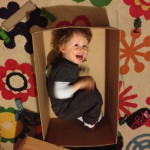 Kid In a Box