If you’re a parent and you’ve never seen the movie The Slipper And The Rose, I suggest you find a way to schedule it into your telly watching this week. Based on the story of Cinderella, it is a fabulous UK musical version starring our very own Gemma Craven and the ridiculously handsome Richard Chamberlain. Although I haven’t watched it for years, I am constantly reminded of it these days, in particular the really very funny Fairy God Mother, who was played by Annette Crosbie.

You see, Fairy Godmother could make all of Cinderalla’s dreams come true; she could magic her from slave labourer to a credible princess in a few clicks of the finger. When Cinderella was too exhausted to go on, she could whip up a cooked dinner for fifty of the Wicked Step Mother’s closest friends with a blink of an eye. But try to boil the kettle for a cup of tea for herself when everyone had left for the ball? Disaster. Magic a new frock that she might wear herself? You must be joking.

I think being a mammy is like that sometimes. We can get everyone up, dressed and fed, lunches made, schedule doctors visits, organize play dates, family holidays and get-togethers, and more or less succeed in serving everyone else’s needs. But try and make it on time for a nail appointment? Fail. Try to look unlike a harried mother with Rusk chunks embedded on her sleeves when bumping into an ex-boyfriend? Fail. Try to do absolutely anything that could be construed as ‘Private’, ‘free’ or ‘Me’ Time? Fail, fail, fail.

Ass Monkey and I had a bottle of Prosecco in the fridge for about two months. Actually, that’s not entirely true. It did leave the fridge on occasion, under the promise that we might open and drink it. And as we were interrupted by children/visitors/falling asleep into our dinner, it has always ended up back on the shelf. I have audibly apologized to the bottle on more than one occasion. ‘I promise I will drink you’, I’d say, sadly, as I slowly closed the refrigerator door.

On Friday night last, we thought we had it sussed. Both kids were unusually knackered by 6pm, so we bathed them and got them into bed by 7.30pm – about an hour earlier than normal. Marvelous! Abandoning all notions of ironing (me) or cleaning up after dinner (him), we grabbed the essentials: a movie, popcorn, cheese and crackers, a selection box (yes, we still have one or two and they’re not going to eat themselves) and the abandoned bottle of Prosecco. ‘It’s your lucky day!’ I exclaimed, reefing it by the next from the fridge. (It’s cool, Prosecco likes it rough).

We were having a great ole time, and of course I was feeling giddy after one glass because I hardly ever get to drink and I’m exhausted all the time (= light weight). Ass Monkey had just refilled our glasses with the last of the bottle when we heard a thud from upstairs. And then major wailing from Jacob, the kind where you think something really bad has happened. You know, like that there might be blood.

I jumped up with such a fright from the couch that I knocked the two glasses of Prosecco off the coffee table and over onto the rug below. Traumatised, I kept going upstairs and found Jacob bawling uncontrollably in our bed, hands in his mouth, and that continued for an hour. He was also kind enough to wake his baby sister, who was then also awake for an hour. Also bawling.

About half an hour into the carnage, I could hear Ass Monkey pottering around, switching off lights and locking up doors. I mean, who did we think we were, enjoying ourselves? 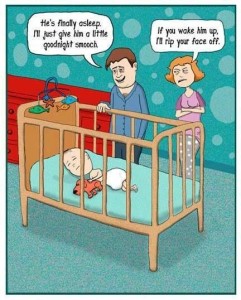 This originally appeared on the HerFamily website. See other articles I have written for HerFamily.ie HERE!