My name is Sharyn Hayden and my baby makes me drink…

You know, before I had Jacob and became a mammy, I used to like to party. Oh, and dance. I used to love to dance. I’d be that girl, who was still up at 7am at a party in Ibiza, dancing my ass off, while all the others who had gone to the trouble of taking energy-promising drugs were fading in crumpled heaps on balconies, clutching on to the crotch of their pvc hotpants for dear life. (There was a lot of pissing of oneself in those days). Eventually, lonely and exhausted in my quest for dance floor company, I would head for bed… somewhere around the same time that the respectable residents of Ibiza were bringing their children to school. I had long discovered that a gay man who has taken 3 pills and smoked several million joints during the early hours of the dawn, was the perfect bedfellow in this type of situation and would locate one to crash beside. 1. No fear of them waking up for at least 10 hours. 2. No fear of them risking a sneaky hand-down-the-pants. Try it and see, kiddos.

Although in my late teens when Ecstacy hit our streets, I never took it. Firstly, I was paranoid that as someone who had had (extremely mild) asthma as a child, I would most likely be the one who died from taking their first half a pill. Then there was the vanity: I just didn’t really like the monged look my friends wore when we were out clubbing but wanted instead to be ‘sexy dancer girl’ on the POD dance floor. Not that any of the guys who were off their faces on pills noticed anyway, and I remained both drug-free and single until my late 20s.

However, drinking was my thing! I loved the ole hooch – pints of Guinness, rum and cokes, cocktails, wine, whatever I could get my hands on. Booze has contributed to countless great conversations that I may or may not ever remember, dance floor madness, outrageous sexual encounters with ridiculous people, sing songs, rows, meeting new friends, and on one occasion; a broken ankle. Oh there was that time I got tequila poisoning too… that was a difficult Day After, let me tell you.

But now that I’ve had my son Jacob, my previously happy relationship with booze has gone awry, and there are two major areas of concern that I’d like to share with you. The first is that it would appear that I’ve lost the nack: If I sit down to watch a movie with Ass Monkey after say, 9pm when Jacob has gone to bed and get a glass of wine into me; I can be guaranteed to be asleep by 9.45. Guaranteed. It would seem that the energy of yesteryears’ Ibiza days are long gone. I’ve thought this through and have concluded that the thoughts of dealing with a frightened or distressed child during the night with the ‘Mammy’s Had A Few’ head, doesn’t quite sit well with my moral conscience. It’s a sad and sorry day that I have to say this to you but: it would appear that I’ve grown up.

Unless. Unless my mother takes the baby overnight and promises to drive him back herself, but not until lunch time the next day. Then, as witnessed two weeks ago at a gig in The Sugar Club, I figure that I’m ‘free’ of the baby and any recollection of being a parent goes out the window, as I proceed to lose the fucking run of myself altogether. To paint you a picture of the flashbacks I have been having: I fondled young boys bums; young women’s boobies; I ate sour jellies til they were coming out my ears; I met my friends brother-in-law and couldn’t remember his name; I confused another friends’ baby daddy with someone else entirely; I offered to officiate at a lesbian’s wedding as Shazwanda (erm, because they won’t want a classy affair?!); and worst of all – I flashed my arse to everyone at the venue.

That’s right. This ‘respectable’ mother put on a little sexy show for everyone, and if the photo evidence on Facebook is anything to go by, my descent into Girls Gone Wild territory was gratefully received and everything, but I am mortified. By 4am, Ass Monkey and I were in DiFontaines Pizzeria on Parliament Street, where they were having what can only be described as the coolest disco where pizza is served, ever. People were shoving slices of pepperoni and cheese into them and bouncing around to the latest Rihanna. ‘It’s like being in Ibiza, baby! Wooo!’ I screamed as I ordered my slice and joined the party. I’m pretty sure I could have danced til 7am…

I have literally been ill from this one night for the past two weeks. For the first seven days afterwards, I couldn’t drink a hot drink because my throat was on fire. Somewhere around Thursday, I remembered the Jaegar Bombs. Somewhere around the second week, photos of my stripper ass started circulating around the internet. If I was still 23 and working in Planet Hollywood, this wouldn’t be so bad, but now on top of The Fear, I have the Mammy Guilts too. If Jacob was at home or if I had had to collect him myself the next day, I would never have gone so bananas. In fact, if I was still a single girl and there was no Ass Monkey or Jacob, I wouldn’t have gone so bananas. The idea that I was ‘free’ for 24 hours prompted this completldness that I had to entertain, and subsequently fucked myself and my body over for weeks.

All in all, I’m blaming Jacob. 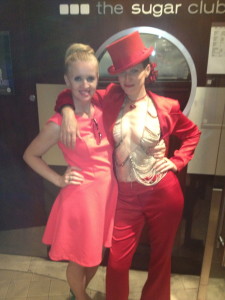 One thought on “Infant-induced alcoholism”