…and my kid is one of them. Jacob is delightful in many ways, but sleeping through the night is not one of his strengths. We originally blamed ourselves for moving house too much, unsettling him, not being strict enough about routine, not setting his room up correctly – too hot, too cold, too much milk before bed, nappies that weren’t absorbent enough and so he’d wet himself and have to be changed at 4am… and that’s just SOME of it.

We have tried absolutely everything to correct the situation: halved his daytime naps, cut his naps out completely, only let him nap before 2pm, brought him to soccer tots to try to tire him out, tried to chill him out with zero stimulation before bedtime, banned anything containing sugar after 4pm, early dinner, playtime, late bath, the Cry It Out method, the Fuck-It-I’m-So-Wrecked-I’ll-Sleep-In-Beside-Him method (I think I made that one up myself though), blackout blinds, 6 stories before bedtime, just a song or two before bedtime, Stay In Bed reward charts, Baby Neurofen, bottle before bed, no bottle before bed…. you catch my drift.

Ultimately, I think it may boil down to this: Jacob is just a shit sleeper. I have been up with him at least once – for a drink, for a cuddle, for a wee, for a chat, sometimes for a full-on row – AT LEAST once a night for the entire duration of this second pregnancy. Some nights I’m so pissed off, I want to hide downstairs in the kitchen and pretend it isn’t happening, and other times, I just think ‘It is what it is’ and get on with it until I can get him back to sleep.

But I was SO DELIGHTED to read this hilarious rant from another exhausted parent in the States, who read up on all the amazing Get Your Kid To Sleep advice when she was having no luck herself, realized how contradictory it all is, and lashed it together in a big rant on Tumblr. Read it HERE

The bottom line is this: every kid, every parent, every family and every house is different. What works for me may not work for you. Only you can decide what is best for you and your crazy kids.

(And by the way, pretty much all that is working for me at the moment is letting Jacob into our bed. SO SUE ME). 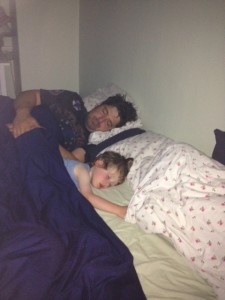