As Jacob nears his second birthday, I have been reflecting on everything that has happened in our lives since his arrival. It’s been BAT SHIT CRAZY, that much I know. I thought my life was busy and a little left of centre before he burst onto the scene, but his resultant presence thereafter has been nothing short of a whirlwind. And…we’re only just getting started. 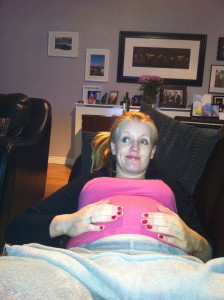 I was a very pretty pregnant lady

When I was two months pregnant, Ass Monkey and I decided to go into business together with engineering firm, Dynamic Cater Care. He had the mad engineering skills, and while my previous employment experience had been managing actors, I knew how to run a business and manage the books. I just had to learn a few new things. For example,  ‘Snickers’ are not only a delicious chocolate bar, but also a type of work pant for the kind of man who needs to carry tools on his actual person. You know, just in case something needs fixing in a hurry (PS how horny is that? No wonder I let him knock me up).  He and I borrowed my dads little van for the first few jobs, called on everyone we had ever worked with in every restaurant and bar in town, told them we would fix all their equipment if they would give us a chance, and we went for it.

Two weeks before Jacob’s due date, our then employee decided to pack it in, in a show of what only can be described as Utter Cuntism. He called to the house on Sunday the 4th of September to collect his tools, and I took great pride in putting a ‘Fuck you’ pack together, essentially listing all the great opportunities he was missing out on by no longer working with us. Two hours later, I was in labour. I can’t officially say if the two things are related, but let’s just blame him anyway. Jacob Anthony Fynes arrived to great fanfare and high fives at The National Maternity Hospital on the morning of Monday September 5th 2011, and by about that afternoon, we were back to work. I may have been off my face (completely) on epidural, gas, air, injections and whatever else I could get my hands on, but somehow I managed to put a few supplier payments through the bank from the maternity bed. Ahem. 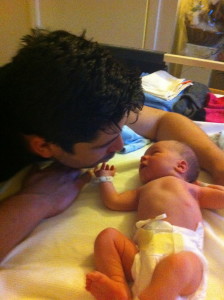 Hold on to your wombs, ladies…

Loads of things went tits up in that first year. Besides Dynamic, I had also been working really hard on a web-based enterprise during my pregnancy. My business partner decided to pack it in for no good reason six weeks after Jacob was born, and then tell everyone it was my fault. Some friends and family made life more difficult where they could have been understanding and helpful. We moved closer to Dublin town so that Alan could get home at a reasonable hour from work and see his son (and also because our neighbor was an insufferable bitch who kept listing out all the different ways that my new baby might die) – and realized that we had moved into The Coldest House That Ever Was.  Business came and went, and came back around again, people who we thought trustworthy dodged paying us for too long, others we’d never met before were fantastic. Alan’s van was the on-the-road workshop and I frantically poured out invoices and statements and dealt with the bank during Jacob’s naps.

We somehow got through it and made a profit that first year, despite a million setbacks, and in Jacob’s second year, found Aaron (or ‘Apprentice The First’), and we had HELP.  Alan had help on the road, and that meant that I had help too. Not only that, but on Jacob’s first birthday, we had built up enough money to put him into a crèche for two days a week and pay me. I had dedicated working days and didn’t have to work during his naps any more, so could relax (or, since I can’t really relax: clean the house, mow the lawn, bake something, write a book). I got back to theatre for a week in the Fringe Fest, launched a comedy club, and felt vaguely normal again. I also finally lost the end of the two stone I put on when I was pregnant (yes it did take a year and eating chocolate at 3am for almost two years does have a downside to your arse. Is this news?!) 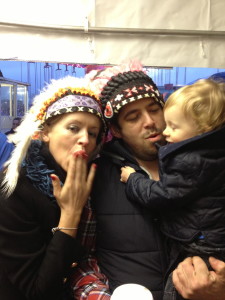 Somewhere around Xmas 2012, we clearly lost it.

We moved house again. In March of this year, we simultaneously moved house and got an official work office and premises that needed complete renovation in the city. We extended Jacob’s crèche days to three a week and lashed into turning it into a fab place to work. We took on Luke, (‘Apprentice The Second’), and ‘Super Dave’, our office intern. My genius accountant Father, now retired, gives us free weekly advice and reminds me about all the scary VAT stuff that my brain refuses to process by itself.

Now that’s all in place, I’m back with this new web-based venture, Raising Ireland, and learning so much from all the parents out there who are raising kids, and pets, and businesses, and building homes, and doing charity work, and partying when they can, and looking amazing while they do it…

…and I KNOW how hard it all can be. I can freely admit that I have cried more in the last two years than I ever did my entire life. Alan would tentatively ask, in those first few post-partum weeks; ‘Do you think you might be a bit post-thingy depressed?’ Well, I was a bit…something! Exhausted, worrying about keeping this little baby well looked after, disappointed by the cruelties of life, both personally and in business, stressed out from the glare of the work computer in the living room, feeling guilty for running to work on something the second the baby closed his eyes, feeling agitated by the sound of unannounced visitors knocking at the door because there was so, so much to be done….

And I do regret it to a degree, to not have been more present, more relaxed when Jacob came along. That I didn’t stay in my pyjamas and tell the visitors to make their own f*cking coffees, or to leave when I was tired. That I didn’t ask for, or accept more offers of help when I could have. That I gave so much of a shit what the stupid house looked like that I forgot to relax. I’ve learned a lot about myself in the last two years, mostly that I place unrealistic expectations on myself, and I need to chill out. 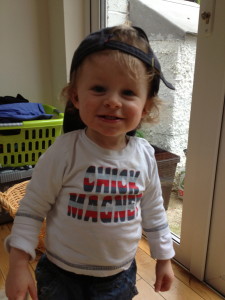 The flip side of all this is, that while I never cried so much, I have never laughed and smiled so much either. No matter how tired or cranky or stressed out I am, Jacob can give me one of his ‘I hope you know that I am taking the absolute piss out of you right now, Mammy’ smirks, and I am on the floor laughing. Things are much different now – there were times when Alan and I weren’t sure we’d make it, on any level, but we’ve survived the baby years with Jacob (and lets not forget Pearl, the doggy!), the first three years of a new business, two house moves, family illnesses, bereavement, fights, Electric Picnic x 4 (!), not to mention all of my shows and auditions and shoot days that I throw in for the FUN… I’m pretty sure we can now survive anything.

I always loved the bones of Jacob, but these days, I am enjoying myself around him more. I put fewer demands on myself, other than to show him a good time in this world while he’s in my company. The last two years have been spectacular, in every way, and I am now looking forward to the next two minutes, two hours, two months, with a big smile on my face… because he is with me. Everything else can – and should – stand still. 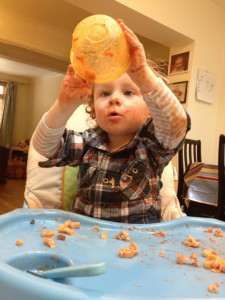