When I was growing up, I shared a room with my older sister.  We had very little in common and there were invisible demarcation lines in our bedroom dividing “her side” from “my side”.  The one and only thing we could agree on was our absolute terror of spiders in the room.  If a spider was spotted hanging about in the corner of the ceiling, or if a stray daddy long legs had somehow got into the room, we would immediately summon our Dad.  Dad would come in and catch the offending creature, and after acting the eejit and chasing us with the spider, laughing at our screams, he would put it outside to safety and we could sleep soundly.  Dad is still my hero today!

I never really grew out of this fear of spiders. However, I had to overcome it many years later when I had my own two little girls.   We lived in a house that seemed to have an extraordinary amount of spiders.  It was a new timber framed house, so perhaps they liked hiding out in the warm walls…but these guys were huge, appeared out of nowhere and could scurry across the carpet at great speed.  They also seemed to like congregating on the ceiling of my daughters bedroom.  Cue the hysterical call from upstairs….”Aggh…Mammy, there is a SPIDER in our room….!!”.   Now I had become the responsible parent… The Spider Catcher.

My methods were quite different to my Dad’s, as I was not a fond friend of these little creepy crawlies myself.  And so, I discovered the magical benefits of The Hoover.  It did not matter if it was the middle of the night; the trusty hoover would be taken upstairs, put together, plugged in, turned on, and WHOOSH!….the spider was sucked right into it.  And then, just to ensure he could not crawl back out again, I would hoover some extra dust up on top of him (there was never a shortage of extra dust), and the girls would sleep soundly.

The little critters also liked to crawl into the bathtub.  Not wanting to introduce the dangerous element of electricity into the bathroom, this was a little trickier.  Turning on the taps and watching the spider struggle as he drowned, and then eventually went down the plughole was not enough for me.  Oh no…because he might crawl back up!  So to reassure my daughters (and myself if the truth be told), I would slosh a good measure of bleach down the plughole after him.  And put the stopper in overnight. And close the bathroom door.

The girls are not little anymore, but they still wont sleep in their rooms if they know they are sharing them with spiders.   I recently went into Rhianne’s room to call her for school – she is now 16 – and there was no sign of her.  After getting over my initial fright and panic, frantically looking under the pile of mixed up clothes on the floor for her, I eventually found her.

She had woken up in the middle of the night and there was a spider in the room. Now that she’s a teenager, she won’t call for Mammy during the night, but she still won’t put up with the creepy crawly company either. Rhianne had taken herself off to sleep in the spare room! 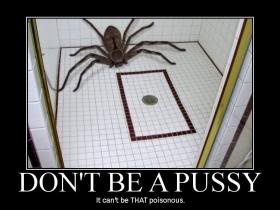