Ass Monkey and I had our now traditional Xmas Eve lunch with Jacob in the fabulous french restaurant Chez Max Palace Street, and we had a little happy memory chat to ourselves about the changes in Jacob for each of the last three Xmas’s that we’ve been there. The first year, he was a tiny 4 month old baby in his buggy and slept through the whole thing; the second year, he was in a high chair playing Peekaboo with us; and this year, as a 2-and-a-bit year old little man, he basically ordered his own meal, roared ‘Jingle Bells’ at the top of his lungs for all the amused customers, and then demanded to watch Bob the Builder on Dadda’s phone (presumably coz we were boring him).

Then we had a FURTHER trip down memory lane – waaaay back to when we didn’t have Jacob, nor each other for that matter – back to ‘The Single Days of Xmas’s Past’. By jesus were those memories still really happy ones. And why wouldn’t they be? We hadn’t a care in the world, we had shit loads of expendable income to splurge on presents and show off to our families at how well we were doing. AND we were really, really drunk most of the time.

I distinctly remember (which I guess is quite miraculous given how pissed I was), leaving work in a restaurant Xmas Eve, going to lunch with all the staff, then going to someone’s apartment in town afterwards to keep drinking, snogged some random boy and then eventually realized…. it was after midnight, I was in the city centre, my parents were in their house in Rush, Co. Dublin – and that’s where I was supposed to be. I forgot to go home. I staggered out onto the empty and rainy streets to grab a taxi, whereby the driver happily informed me that it was double the fare as it was essentially Xmas Day. It cost me about £100.00 to get home at the time.

As Ass Monkey and I laughed about our ‘crazy days’ stories, I realized that I was so glad to have had them and experienced them, because I appreciate our new chapter now. Not that I’ve done it all, but I’m just in a different stage of the journey of my life now. Sure, I’d like nothing better than to camp down in O’Neill’s for the afternoon with Ass Monkey, drinking hot whiskeys til they chucked us out, but we’ll have to wait a while to get back to that one. Not least because we have Jacob to consider, but because I’m knocked up again & can’t realistically get blotto. I did enjoy very orange juice-heavy mimosas, some red wine and Guinness over the festivities, but mostly I was either a) designated (preggo) driver or b) asleep by 10pm, so I was a well-behaved sober lady.

In any case, drunk, preggo, sober, whatever – I think we had one of our better Xmas’s on record to date. Jacob hasn’t quite gotten to grasps with the ‘magic’ of Santa Claus yet, but he sure knows who he is & is still obsessed with his Thomas the Tank Engine train & track that Santa brought him. Hearing him sing Jingle Bells (unprompted!) on Xmas morning has to go down as one of the more heart-warming of moments. See it here: Jacob Sings Jingle Bells 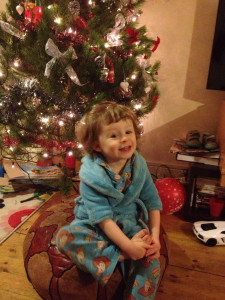