Now that we are (mostly) unpacked at the new house and the skips have been taken away, I have turned my attention to trying to have a digital clear-out. I am positively convinced that in the next 24 months or perhaps, years, I will have achieved this via my eventual understanding of Google Drive and being nicer to my computer desktops by not saving every single photo and video that I come across to them.

Granted, I’m not really enjoying it, or looking forward to the next two years BUT! I am finding some joy in the odd little gem here and there. Like this one; a letter I not only wrote but also printed and gave to Ass Monkey’s sister who took our dog Pearl for a week when Jacob was born. Yes, I put the letter in Pearl’s ‘Holiday Bag’. And yes, I only wrote it as if I was Pearl.

Hi, Pearl here. You may have heard I’m a bit of a bitch but mostly I’m misunderstood & frustrated because these stupid fucking humans who ‘take care’ of me haven’t learnt how to speak basic common Doglish yet. Idiots.

Anyway, thanks for letting me come and stay. I think Mammy Sharyn is off to hospital to have some liposuction done. She’s really let herself go in the last few months and looks like a complete fat arse. How she thinks she’ll ever fit into a size 10 again is beyond me. Daddy Alan is in hiding because he’s MORTIFIED about the situation. I recently heard him on the phone to a mate saying he hadn’t signed up for such a fat bird. It was Christmas at the time so I can only assume that’s when Mammy Sharyn started shoving food down her massive trap.

To be honest, I’m not entirely impressed with such unstable and dysfunctional Masters, so if things work out between you and I, maybe we can hang out indefinitely. I’m sure my cousin Baxter will have something to say about that but honestly? He can go and f*ck himself. All I ever want to do is wrap my paws around his indifferent, grimacing face, and all he wants to do is watch Will & Grace re-runs. I think, in time, he’ll come around to my way of thinking and be my best friend. Either that or I’m going to chew his pride-coloured lead to shreds while he’s asleep. That’ll learn him.

My crazy, over-organised Mammy Sharyn has packed a bag for me that is RIDICULOUS, and not just because it’s a knock-off Louis Vuitton monstrosity. She has my bowl in there (pink, how stereotypical), a red Kong that I usually eat peanut butter out of and that keeps me entertained for ages, and other toys and treats. Mostly, they don’t give me treats unless I sit down and give them the paw. The c*nts.

They also have their ‘orders’ that they like to shout at me, to get me to do things that make them feel better about themselves. So I can ‘sit’, ‘lie down’, ‘give me the paw’,  ‘go easy’ when I’m a bit hyperactive, and Daddy Alan thinks its great that I’ll give him a ‘high five’, but mostly I’m just putting my paws up to say ‘Back the f*ck off asshole, would you??!!’

My harness might look stupid, but it’s because I get too choked with the lead going from my collar. I think I must have been be-headed in a past life – I’m thinking about talking to Psychic Sally about that. If you put the main bit around my neck, I can put my own paws through the side straps. Yes, I am that f*cking amazeballs.

So that’s the low-down, Aunty Naomi. Everyone knows you’re the coolest aunt, so there’s no fear of my pissing on your floor. Promise. I will, however, require a LOT of affection, because they starve me of it here, and that’s just tough shit for you. Get your cuddles on.

Lots of love and smelly poos,

PS: I think they’ve packed some of their socks with their smell on it too so I won’t be lonely without them. But I can’t really talk about that right now.’ 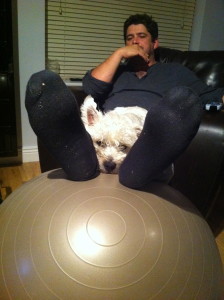